...on a 9000. Rear-curtain sync and long time sync is only enabled when using the flash on a camera which supports the functions. All flashes incorporate an autofocus illuminator, which is activated when the ambient light level falls below about EV 2. The autofocus illuminator projects a pattern of near-infrared (but still visible) light onto the subject to allow autofocusing. The operating range is between 1 and 5 meters, and it seems to work best with lenses faster than about f/4.5.

This is the smallest dedicated flash made by Minolta. It features a maximum guide number of 18 in meters at ISO 100 with 35mm coverage. It has no test button and no provision for extension cords (use the OS-1000). It does not swivel or tilt. It uses AAA (R03) batteries or a 6v lithium battery for extra fast charging times.

The Program Flash 2800AF is a more versatile and powerful model. It features a maximum guide number of 28 in meters at ISO 100 with 35mm coverage. The maximum flash range is 16 meters when using a lens set at f/1.7. In daylight, fill-flash is automatic in program mode. Other features include: a built-in AF illuminator for autofocusing, automatic X-sync, Direct Autoflash Metering (TTL off-the-film) that operates in all modes, extension cord compatibility, and thyristor circuitry for high-speed recycling with maximum battery life. It also has a power setting for hi/lo output and a distance scale for easier manual computations. Coverage is 35mm, but a wide-angle panel is rumored to exist. It does not swivel or tilt.

This flash is the top-of-the line model. It features a powerful maximum guide number of 40 in meters at ISO 100, adjustable in 6 steps -- the lowest power setting can be used with the MD-90 at 2fps. When using a lens set at f/1.7, maximum flash range is 23 meters. The power zoom head automatically adjusts flash coverage for focal lengths from 28mm to 70mm, even while zooming. Unfortunately the zoom is not internal to the flash head, so the head extends while zooming. The zoom is also slower and noisier than more recent Minolta flashes. The head can also be tilted 90 degrees up and 180 degrees side-to-side (that means 90 degrees left, 90 right, so it can not be pointed backwards) for bounce-flash photography. To keep you informed, an LCD data panel continuously displays a full range of exposure-related information.

The 1200AF is a ring flash, which means that it surrounds the lens. It is specially designed for close-up and macro photography. It has 4 focus lights and 4 individually selectable flash tubes.

All Minolta Auto Electroflash units can be used on the Minolta 9000; however, certain features will not operate.

The Control Grip CG-1000 attaches cordlessly (with help of the contacts at the base of the 9000) to the Minolta 9000 and accepts either of the Program Flashes. Its battery pack holds six AA-size batteries and delivers the additional power needed to reduce recycling time for sequential shooting. When two Program Flashes or other compatible devices are used (one on the camera and one on the CG-1000), lightning-ratio control is automatic with the flash on the grip providing 2/3 of the light. Included in the CG-1000 set are an AF Illuminator AI-1000 and 5m Extension Cable EC-1000.

This adapter gives you the ability to use OLD flash equipment, meaning x000-era flashes, with NEW cameras. The AF illuminator will not function and you will get no "exposure OK" indication in the viewfinder (the indicator on the flash will work however). Autozoom on the 4000AF will work, and TTL will work with all flashes. On 800si and up, rear curtain sync will work with old flashes.
Some retailers, mainly large US and UK mail order companies, have their own alternatives to the FS adapters. They will work perfectly as Minolta original ones.

This adapter gives you the ability to use NEW flash equipment, meaning flashes with the new Minolta-style iISO shoe, with x000 cameras. Features not supported by the camera, such as high-speed sync and wireless flash, will obviously not work. You will also lose power zoom, viewfinder indication of a good exposure and the AF illuminator feature with this adapter.
See also the comments on the FS-1100 above!

This approximately 1 meter long (extended) spiral cord cable couples to the camera shoe on one side and a special connector on the flash on the other. Be aware that there are two Cable OCs, one for the original "9000 style" shoe (called OC-1000 or just "Cable OC") and one for the "i style" shoe of the newer cameras (this one is called OC-1100). The connector on the flash side is universal, however, and will connect to all Minolta flashes new and old which feature the connector. Some flashes lack the connector, however, most notably (for a 9000 owner) the 1800 flash; to work with the Cable OC, it also needs the Off-Camera Shoe.

This is a spiral cord cable extender to extend the length of the Cable OC. It is about 1 meter long extended.

This spiral cord cable connects two flashes to each other. In this way, a camera-mounted flash can be connected to an off-camera flash, both units firing simultaneously. It can also be used to chain two off-camera flashes together, if used with the Cable OC and Off-Camera Shoe.

This small gadget allows connection of up to three Minolta flashes to a single camera. It acts as a "splitter", taking one incoming Cable OC and three outgoing Cable EX's.

This is a small shoe in which you mount the flash. It has the same connector that is built-in in the higher-end flashes, allowing the flash to work with the off-camera cable system even when lacking the connector. There are both "9000 style" (called OS-1000 or simply "Off-Camera Shoe") and "i style" (OS-1100) flash shoes; make sure you get the right one. 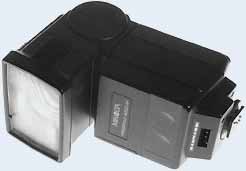 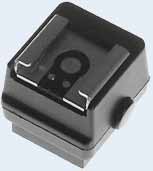 FS-1100 adapter for use of old flashes with new cameras. Not to scale with the flash above, obviously. 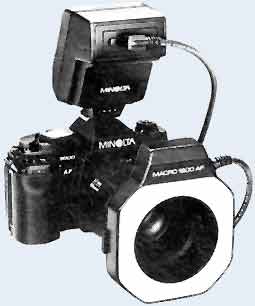