Four different backs were made for the 9000. Each one serves a different purpose, and some of them are quite advanced -- even unmatched by any other camera/back combination. Either of the backs can be attached cordlessly in place of the Minolta 9000's standard back. The backs are user interchangeable, using a lever inside the film chamber. Just slide it down and remove the back; to reattach, slide the lever down, insert the bottom part of the back, then insert the upper part and release the lever. Check that the back is securely attached. Film speed for data imprinting is set automatically by the camera.

Program Back 90 enables imprinting of time (with day), year/month/day in any of three orders, consecutive numbers, or fixed numbers. When desired, imprinting can be combined with its intervalometer and "long exposure" functions.

Program Back Super 90 (PBS90) features: Seven exposure modes, including three user-selectable exposure programs; automatic bracketing of up to 9 exposures; an intervalometer with settings for start time, length of interval, number of exposures per interval, and number of groups of exposures; concealed data imprinting of exposure data, consecutive and fixed numbers, date, or time along edge of frame; and a multi-spot-metering memory that stores up to 8 readings from the camera's built-in meter. The PBS90 is extremely advanced, opens up many interesting possibilities, but is unfortunately very complex to use. It has a bad user interface, with ten small and confusingly labeled rubber buttons where the text wears off quite easily (rendering it impossible to control the back), the LCD display is of low contrast and lacks backlighting, and the back is also fragile. The biggest drawback is in the custom program modes; this is a useful feature, but is hampered by a surprising control issue -- when activating a user program, it is not possible to use the camera's shutter speed and aperture control levers, instead you have to use the small buttons on the back. Also, the imprinting of data still occupies a part of the picture, and forces you to crop pictures afterwards or mount your slides in exactly one way, not giving you the ability to nudge the picture around in the frame. The final straw is that the back is rather thick, moving the physical back of the camera away from the viewfinder, which in turn makes it hard to use for photographers wearing glasses. The back requires six SR44 (V357) button cells, four in a compartment accessible from the back, and two requiring the film compartment to be opened.

The EB-90, intended for photojournalists among others, uses special cassettes that holds 100 exposures of 35mm film. Bulk film is loaded into these cassettes with the film loader FL-90. Two cassettes were included when you bought the back. The EB-90 comes with an integrated Program Back Super 90, and the writeup about that back also applies to the EB-90. The EB-90 may not fit early 9000's due to the camera's slot being too small for the EB-90 latch. According to John Schlichther, "The official solution is a modification to the 9000. I found that it was actually quite easy to disassemble the EB-90 latch (there is a small black cover plate which is glued over the latch, it is easily pried off with a jewellers screwdriver, careful, there are springs) remove the metal tab, and file a little of each end until it fits into the 9000 slot. Carefully reassemble and glue the cover plate back on. Now it fits all 9000's".

The SB-90S, together with its sister model the SB-70S intended for the 7000 camera, were in a way the first digital SLR cameras from Minolta (they were first shown at Photokina in 1986). The Still Video system was a way of capturing the image electronically through a CCD, but storing the images in an analog way -- much like VHS, but the storage for still video were on small (two inch) magnetic discs, allowing 25 or 50 pictures per disc depending on quality. The SB-90S uses a 2/3 inch CCD with 380 000 pixels, has a sensitivity of ISO 200, and relay optics acting as a 2x tele converter. It has automatic white balance with manual settings available on a small LCD display. The 9000 thus holds the merit of being the first (and only until the digital back for the R8/R9 is released) 35mm SLR that can be used to capture both film and electronic images.
The Still Video system was unfortunately of too low quality to be really useful, and died a swift death with the advent of "real" digital cameras with higher resolution and digital storage. However, the SB-90S did herald the Minolta RD-175 digital camera, released in 1995 with a 1.75 megapixel final resolution.
As far as I know, there was only a NTSC (US/Japan color TV system) version of the back; a PAL (European) version was never released. 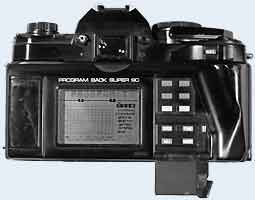 Program Back Super 90, a very advanced multi function back. 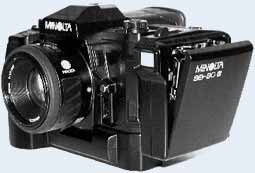 Still Video Back SB-90S, in a sense the first digital Minolta SLR. 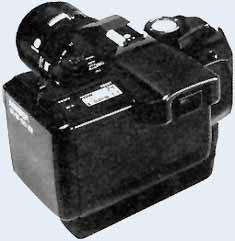 Another view of the SB-90S.