The Minolta 9000 is the only SLR camera with integral auto focus ever made that lacks a built in winder for advancing film. Thus, if you want to shoot with speed, you need an external motor. There are two of them; they attach to the bottom of the camera, using the tripod thread.

The Auto Winder is a compact, relatively low weight winder. It advances film with two frames per second, with either single-shot or continuous film advance. These modes (together with "off" which naturally means "no motorized winding") are set by the upper switch. The lower switch controls the focus priority mode; if set, the camera won't release the shutter until it thinks that correct focus is achieved. The AW-90 is powered by four AA (R6) sized batteries; alkaline or nickel-cadmium batteries can be used.
The AW-90 does not feature motorized rewinding. To rewind the film, press the small pin at the bottom of the winder, and rewind the film manually with the rewind crank. The AW-90 has no vertical shutter release.

The Motor Drive is a professional motor with advanced features. It offers single-shot and three speeds of continuous winding:

It also features a continuous winding focus priority mode; the speed of that mode is obviously depending on how fast the camera can acquire focus between the shots, but the theoretical maximum is four frames per second. If the focus priority mode is not used, the camera will make no attempt to focus between sequential shots.
The MD-90 can also rewind your film, and has a safety feature -- a settable (and resettable) indicator for how many frames that are left on the roll, so it won't rip the film clean from the spool. To rewind, slide the "counter reset" button to the left and push the rewind button. Film rewinding is fast, approximately 7 seconds for 36-exposure film. It leaves the film leader outside of the cartridge. A LED indicator on the back of the MD-90 keeps you informed of the motor drive's operating condition; it lights green for winding and rewinding and red at film end (film end according to the settable counter, that is).
The MD-90 is powered by either of two detachable battery packs; the Battery Pack BP-90M which uses 12 (yes, twelve) AA (R6) batteries, and the rechargeable nickel-cadmium battery pack NP-90M which is significantly smaller and lighter. The latter comes with its own dedicated charger which is capable of charging two packs at the same time. Charging time is 8 hours, and has to be interrupted manually. Both battery packs have shutter releases for situations when the camera is held in a vertical position. The BP-90M is good for 40 rolls of 36-exposure film, while the NP-90M can drive 35 rolls before needing charging. 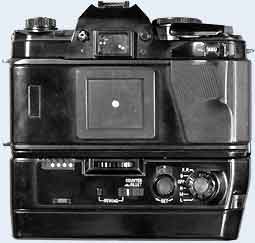 A label from the 220v charger for NP-90M, showing some technical details if you want to build your own. It's 2x22v because the charger can charge two packs at the same time. Negative polarity is on the center pin.